Why do people move? I’ve taken up this question in a series of recent posts (some co-authored), and though the available data to address the question remains sparse, it’s getting richer all the time. Today I want to compare three different sources of information, highlighting how much it matters just how we ask people about their reasons for moving.

In the USA, the CPS and the AHS ask about reason for move in different ways that might at first seem subtle, but have a big impact on results. The CPS tracks individuals, and asks where they lived one year ago. If they lived somewhere different from their current residence, they’re asked “what was your main reason for moving to this house?” This directs them to choose only one reason as their main reason, with options to specify reasons not on the list. The AHS, but contrast, tracks households, and asks only the reference person for the household if they moved in the last two years.  If so, they’re directed to a “recent movers” section, providing a little preamble and asking them repeated yes or no questions about their move, each of which might constitute one of multiple reasons to characterize their last move. 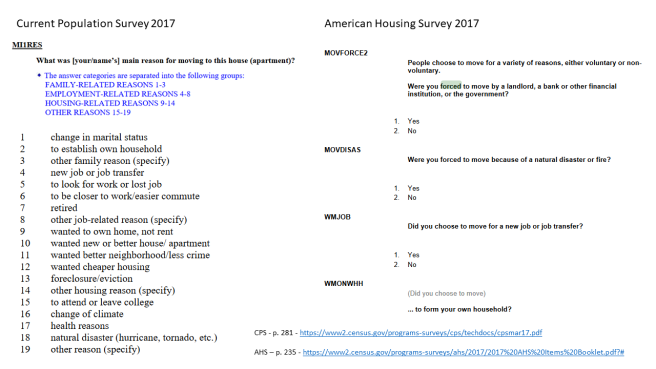 There are a few major differences in these questions which I’ll detail in a moment, but one is worth talking about insofar as it’s especially subtle given its possible impact. Researchers often think of two separable but related processes as involved in moving. There are the “push” reasons you might leave a home and the “pull” reasons that might draw you to a new one. Reading the different questions carefully, the CPS clearly cues for “pull” reasons in specifying “reason for moving to this house.” The implicit comparison is “as compared to some other house” you might’ve moved to, rather than “why did you leave your old house.” The AHS more neutrally refers to moves overall, letting respondents sort through push or pull factors relevant to each option. I’ll come back to why this might be importantly in a moment. First let’s jump over to the Canadian Housing Survey question, which asks the responding member of each household about their previous residence and the move to their current residence, no matter how long ago it occurred. 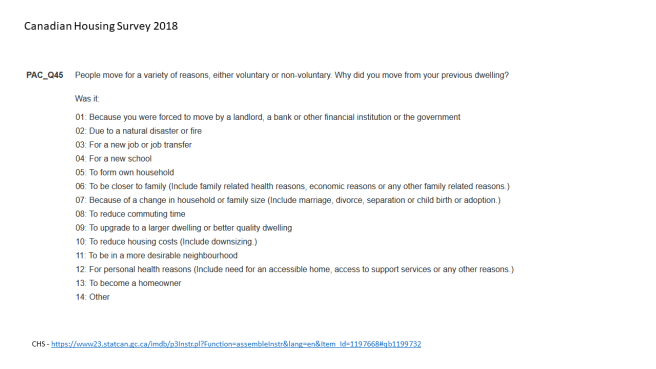 The set up is then quite similar to the AHS, except the CHS appears to provide all of the options at once instead of one at a time (people can still choose more than one). There is significant overlap (one might say “copying”) in the language of each option, though the CHS also provides a few extra options unavailable in the AHS, concerning moves for school, personal health, and to become a homeowner (all closely related to options available in the CPS).

All of these differences create real problems for comparing results, but its also clear that the CHS and AHS are closest (rather than the CHS and CPS, which I’ve compared before). So let’s compare CHS (StatCan 46-10-0036-01) and AHS (Interactive Table) first. Here I’ll compare countries overall and also the four biggest metro areas within each country to get at some of the variation. 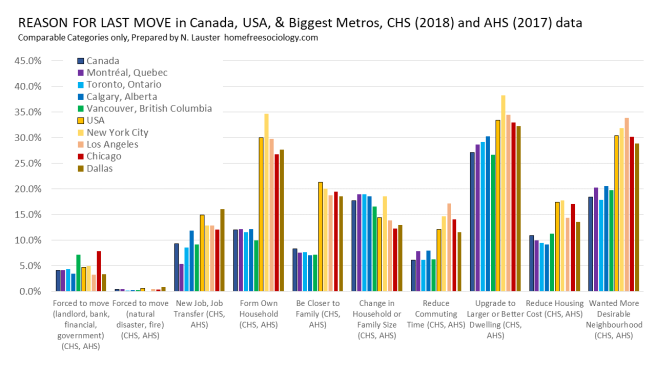 The Canadian data is themed in the “cool” colors of blue, purple, and green, while the USA is in “hot” shades of red, orange, and yellow (“hot zone” references entirely unintentional, but perhaps apt). Here we see only the categories where AHS and CHS options map – almost identically – onto one another. For many options, the percentage of movers indicating the option at least partially explains their last move matches pretty closely. In particular, the “forced move;” “new job;” “change in household size;” and maybe “upgrade to bigger dwelling” all look like the AHS and CHS could plausibly be drawing upon the same distributions. But there are some big differences with the other options, with Americans reporting greater likelihood a move relates to “form own household;” “be closer to family;” “reduce commuting time;” “reduce housing cost;” and move to a “more desirable neighbourhood.” Are these real differences between countries or artifacts of the different surveys themselves?

Let’s zoom in on a few areas and add in the CPS comparison (here accessed via IPUMS for contemporary metro data) to provide more information. First up: forced moves! 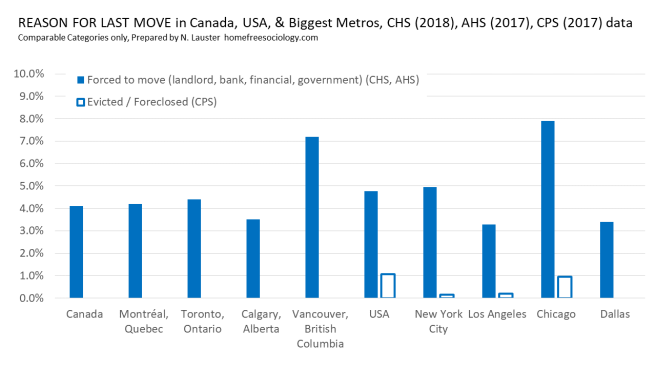 I’ve written about “forced moves” before, with special attention to those relating to landlords, banks and other financial institutions, and government actions in Canada and evictions and foreclosures in the USA. I puzzled over the differences between Canadian (CHS) and American (CPS) data. But looking across all surveys, we can see that the CHS and AHS data actually look very similar. It’s the CPS that seems to report an unusually low percentage of evictions and foreclosures rather than forced moves. So what’s happening? If one were reporting only the main “reason for move,” it would seem like being forced out of one’s previous residence would rise to the top, so it’s probably not just a matter of choosing a single “main” reason vs. multiple reasons. BUT let’s remember that the CPS also conditions peoples’ choices toward “pull” factors relating to the “main reason for moving to this house.” So CPS respondents are likely drawn toward considering why they ended up in their current residence, as opposed to other possible places they could’ve moved, rather than reporting on why they left their old place. Like I said, it’s a subtle difference in question wording, but here it probably has a big impact.

Returning to the AHS and CHS comparison, it looks like forced moves have been a little bit more common in the USA than in Canada, which matches with my rough expectations given differences in tenant protections, mortgage finance regimes, and economic turmoil. (If anything, I suspect these differences may become more stark, with more Americans experiencing forced moves as pandemic restrictions loosen). There remains big variation within each country, with Metro Vancouver topping forced moves in Canada and Chicago topping forced moves (and exceeding Metro Vancouver’s rate) in the USA. Of note, the CPS data is probably less reliable at distinguishing between Metros, but it’s notable that Chicago still stands out. 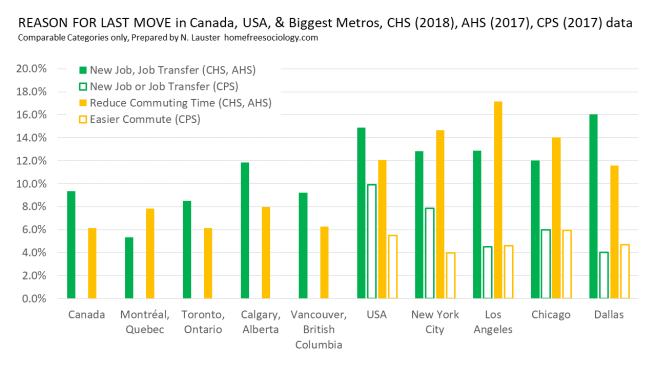 We can consider two different work-related options explaining moves: moving for a new job and moving to reduce commuting time. Interestingly, new jobs or job transfers account for more moves than reducing commutes in Toronto, Calgary, Vancouver, and Dallas. This is likely related to the high in-migration to these metro areas. Reducing commutes accounts for more moves in generally slower-growing metros (Montreal, NYC, LA, and Chicago). A notably smaller proportion of respondents in the CPS chose job transfer or reducing commute as the MAIN reason for moving to their current house, indicating lots of people considered a job-related move as likely just one of multiple reasons for moving – and possibly less related to why they chose a particular residence from multiple possibilities.

Let’s take a look at a suite of other, more housing-oriented reasons people might choose to move. 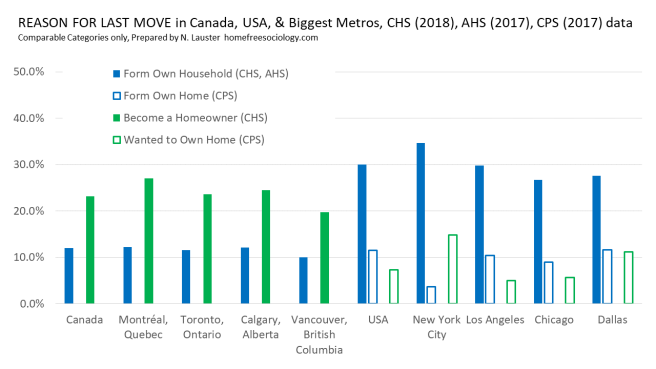 “Form own household” as a reason to move is commonly thought of as capturing people like young adults (and/or divorcees) splitting off from existing households to start their own. This is a pretty regular demographic process, so it’s somewhat surprising that it seems to be related to so many more moves in the AHS than the CHS. Is this a Canadian-USA difference? Maybe, maybe not. Here the CHS and the CPS actually look more similar. What’s going on? One likely possibility is related to the fact that the AHS doesn’t have an option for people to choose “to become a homeowner” unlike both the CHS and the CPS. The closest SOUNDING option is “to form own home.” It seems entirely possible that this ambiguity in the meaning of “own home” – whether it means to become a homeowner or to separate from a previous household – explains much of the difference between the AHS results relative to both the CPS and the CHS.

Let’s compare moving for a larger dwelling with moving because of new household members. 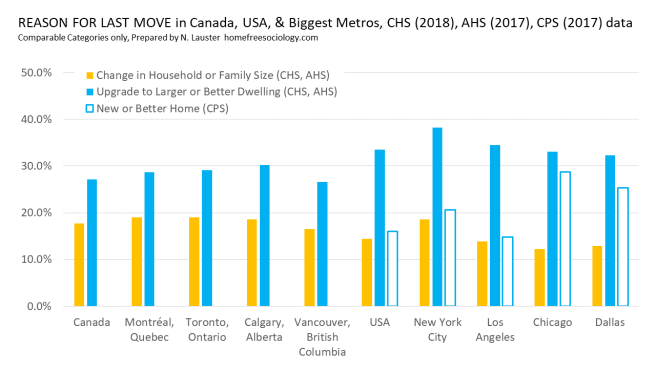 Change in household or family size and upgrading to a larger dwelling might be understood as related options. Again, very basic demographic processes – having children, partnering, etc. – often motivates a move to a larger home. Other demographic processes can result in smaller households, of course, but it’s less often people move in direct response. If a change in household size typically operates as a “push” (e.g. “this place is too small for us now”) then moving to a bigger dwelling operates as a “pull” (“this place is just right!”). What’s interesting here is that the CPS is predisposed to capture the “pull” part of this kind of move, and has no option at all for the “push” part. Perhaps as a result, here the CPS seems to “overperform” with “new or better home” as the MAIN reason for move almost reaching the prevalence of “upgrade to a larger of better dwelling” as one of many reasons for a move in the AHS. 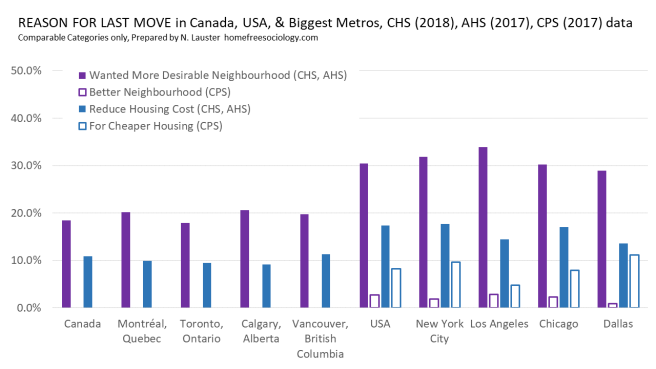 Comparing the CHS and the AHS alone would make it appear that neighbourhood desirability is much more important as a reason for move in the USA than in Canada. We could spin all kinds of possible reasons for this (e.g. greater neighbourhood segregation and inequality in the USA). But adding information from the CPS reveals that moving for a better neighbourhood is very seldom the MAIN reason for a move. People mostly don’t move in search of better neighbourhoods, it’s just a kind of side feature. So maybe it doesn’t actually tell us much that Americans mention this feature more often as describing their reason for moving (when presented with it as a “yes/no” option) than Canadians (provided as one of many options). By contrast, the CPS results more closely track both the AHS results (which still run higher) and the CHS results for moving to cheaper housing as a reason for moving.

LONG STORY SHORT: every move is a story in itself. We only partially capture this story with survey questions about why people move, and how we structure those survey questions really matters for the results we get. Compare with caution! 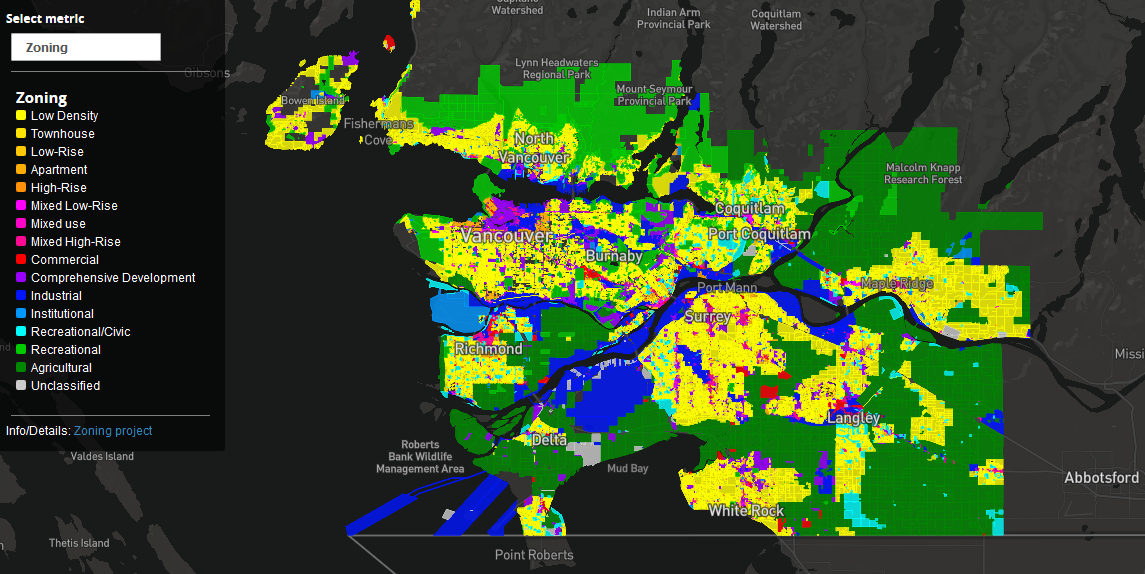