While preparing to teach my sociology of life course class, which is kind of like a sociology of time, I recently stumbled across the data tables (45-10-0014-01) from the Canadian Time Use Survey for 2015. This allows me to answer a very important question: what do Canadians do all day?

Of course different Canadians do different things.* But we can break them into a couple of broad groups to get some sense of the average number of hours they spend doing various things. It’s important to keep in mind that here that the averaging extends across both different people and different days (e.g. of the week, month, and year). Many people don’t record carrying out some of the activities described below at all, but they get averaged in with those who do. Others’ activities (e.g. paid work) may cycle so that active and inactive periods (like weekdays and weekends) average out (so a 40-hour work week averages to 5.7 hours a day).

Since I’ve got this life course theme and we’ve got data on age groups, let’s look at that. How does time use change between young adults, more middle-aged folks, and elders? We can split this out by gender too. I’ve color-coded activities so that sleep and personal care are in purple shades, work and study in green, travel in gray, unpaid homemaking work in orange, and leisured activities in blue. There are usually between one and two hours unaccounted for by this schema, coded in shades of off-white at the top. 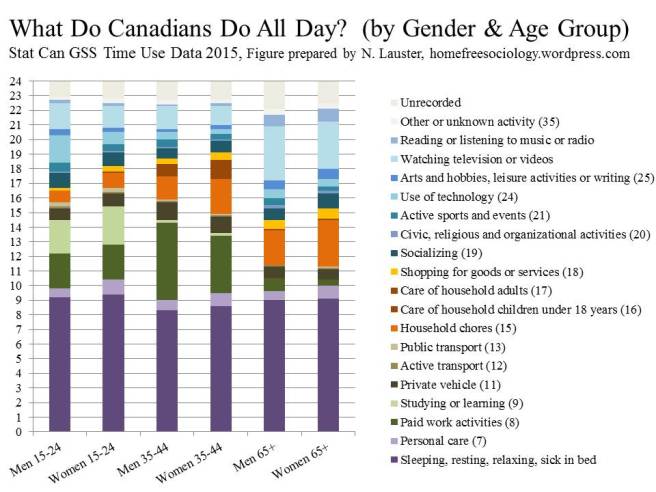 Not surprisingly, young adults (age 15-24) spend more time studying than any other group. They’re the ones most likely still in school! But this time is balanced against working. Young men have strikingly more leisure time than young women, and they appear to spend a lot of it using “technology.” I suspect that means they’re playing video games for, like, an average of two hours a day, but there may be other interpretations (see footnote 24 in the original).

Folks closer to middle age spend a lot more time working, both for pay and at homemaking tasks (esp. childcare!) They also appear to spend the most time in personal vehicles. And they get less leisure time and less sleep than at other ages. But once again, men appear to get more leisure time than women.

How about those in retirement ages? Both men and women get a lot more leisure time (which they appear to spend largely watching TV). But do women catch up? Nope. Men still get the most leisure time, and the difference largely seems to come down to how much time is spent devoted to household chores instead. It’s certainly possible that some of those chores might also qualify as hobbies (e.g. cooking), and other things, like “personal care,” also help account for differences in time left over for leisure between men and women. But household chores and carework definitely remain gendered.

So, if you’re a Canadian man looking for a New Year’s resolution, here’s an easy one: take on more housework! (Note: this absolutely includes the author). The other big message for me is: I am not getting enough sleep! I mean seriously, I’m doing better than when my kids were really little, but 8 hours is still entirely aspirational.

*-An important caveat. As is so often the case, the General Social Survey doesn’t cover or claim to represent all Canadians.

The 2015 GSS collected data from persons aged 15 years and over living in private households in Canada, excluding residents of the Yukon, Northwest Territories and Nunavut and full time residents of institutions.