BC has been lauded for rolling out an assistance program for renters, unlike basically every other province. At the same time, BC’s also been criticized for the perceived inadequacy of that rental assistance program, as well as the fact that it literally goes straight to landlords. In conjunction with the temporary eviction moratorium, it would appear that the BC Temporary Rental Supplement (BC-TRS) is really aimed at supporting landlord incomes and easing tenant-landlord relations to avoid a rash of evictions once the moratorium has been lifted.

Here I want to question another aspect of the program, at least as we’ve seen it so far: What’s it got against couples?

The BC Temporary Rental Supplement, as announced today, provides $300 per single person or couple household, and $500 per household with dependents. But roommates can apply separately for benefits, and it would appear each roommate is eligible for a $300 or (if living with a dependent) $500 rent supplement. Here are relevant items from the FAQ:* 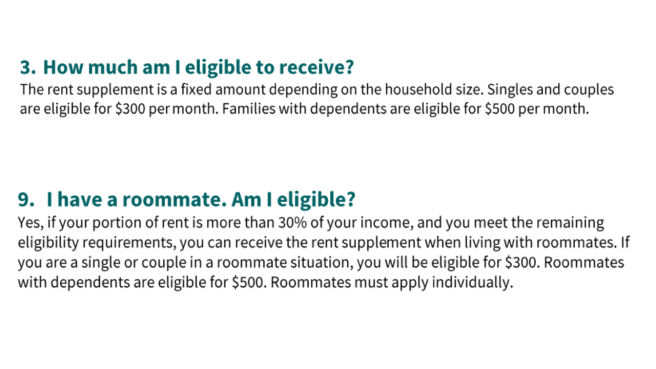 This means the “household” definition being applied by the province – whereby roommates constitute separate households – best matches the “family” definition of the Census, whereby family is defined by a couple (married or common-law) or parent-child relationship. The Census considers roommates as members of the same household, but unrelated, and hence not members of a family.

Why does it matter? Well, what’s the distinction between roommates and a couple?** Because if you’re a COUPLE you max out at a $500 benefit with children or a $300 benefit without. But if you’re ROOMMATES, it appears you qualify for $300 each, or more if there are children involved, maxing you out at $600+. In effect, couples have their status turned against them in terms of government benefits.

Interestingly, this isn’t the first time the current BC government has zeroed in on couple status as a determinant of less than favorable policy treatment. The BC Speculation and Vacancy Tax hinges upon marital status in terms of whether overseas partner incomes get counted toward family incomes, distinguishing “satellite families” hit with higher property taxes from everyone else. In effect, if you own a home this is a huge disincentive for formalizing, declaring, or maintaining transnational relationships, at least if your partner potentially earns more than you. BC tax policy says it’s better for you to split up than stay coupled with anyone outside of Canada, just as BC renter support policies seem to tell us it’s better to be single (with a roommate) than part of a couple.

One way of looking at the government position on rentals is that couples might be considered more resilient than singles. So singles, including roommates as well as single parents (who get $500), need more help and more allowances. And as I wrote previously, with respect to rental supports this might well be correct. Singles and single parents make up the bulk of those in core housing need. I’m happy that the BC government is providing special help to those with dependents, even if I wish the amounts were higher.

It’s also the case, as in my past research auditing rental listings, that BC’s tipping of the scales against renting couples might actually counteract some of the beneficial treatment they usually receive in the rental market, where landlords tend to discriminate against single parents and some same-sex couples (who may, in some cases, have been taken for roommates). Finally, policy is being rolled out at a ridiculously fast speed, which is important and a success in its own right because people are in need of money now. But that speed is bound to come at a cost in terms of care in crafting policies. We’ll see plenty of mistakes and unintended consequences of fast policy roll-out in the days to come. We shouldn’t forget the urgency behind the roll-out, even as we offer up critiques and fixes.

That said, we’re left with a fun contrast. If Pierre Trudeau famously declared “there’s no place for the state in the bedrooms of the nation,” the government of BC still wants to know: are you two an item?

UPDATE (Apr 12, 2020):  Another interpretation (in this case my partner’s) is that the BC – TRS is geared entirely toward assumptions about how many bedrooms different kinds of households need and what the associated costs might be. The logic being that couples might only need 1BR, whereas parents with children need at least a 2BR, and roommates are (ironically) assumed to sleep in separate bedrooms, also requiring at least a 2BR. This interpretation actually mirrors the logic of the Canadian National Occupancy Standards defining the suitability aspect of the Core Housing Needs measure. Accordingly, BC-TRS payments could be designed simply to go up in response to anticipated bedroom need. I like this interpretation a lot, so I thought I’d share it too! (I hinted at the importance of considering bedroom need in my previous post on the renter benefit, only I didn’t think they’d adopt the couple assumption from the National Occupancy Standards, which I’ve also researched in the past! Kicking myself a little that I didn’t think of this interpretation first, but also patting myself on the back for settling down with someone more clever than me…)

*- Yeah, also your adult kids don’t qualify as roommates (item 18) and you don’t get any assistance if your landlord is also a family member (item 19).

**- As it happens, I asked just this question in my dissertation… though from a viewpoint embedded within demography (i.e. are people more likely to cohabit with an unmarried partner in response to housing shortages, making them like roommates, or less likely, making them act more like married couples?) In the context of Swedish demography, easier access to housing meant greater likelihood of cohabitation, providing evidence that cohabiting couples tended to be acting more like married couples than economizing roommates. BUT, there’s a lot of grey in there. Especially insofar as we usually leave it to people to define their own relationships.

2 thoughts on “So are you two a couple now? Asking for the BC Government”