Gated Communities are kind of awful, but the communities that form at GateWAYS are actually pretty cool. In a world of immigration, that’s where we tend to get a lot of our diversity.

As Canada’s Gateway to the Pacific Rim, Vancouver is fortunate to be full of Gateway Communities, both as a central City and as a broader Metropolitan Area. Nearly half of Vancouver’s residents were born outside of Canada. Where do they come from? All over, but we get especially large representation from across Asia. Media stories tend to focus on Chinese immigrants to the area, where Mainland immigrants have recently overtaken historical streams from Hong Kong and Taiwan. But the streams from China constitute only a minority of Asian immigrants overall. Large streams from the Philippines, India, Iran, South Korea, and Vietnam also pour into both the City and Metro region of Vancouver. Other streams from the UK and Europe, the USA and the Americas, and Oceania (especially Australia) build upon the proximity and colonial legacy of Canada. Relative to the descendants of settlers past, First Nations and other Aboriginal identified Canadians make up only a small proportion of the area’s residents, though their cultural impact is profound and local First Nation bands are emerging as a development powerhouse in the area.

Let’s draw upon Statistics Canada’s community profile data from the last Census (2016) to put this all up for comparison:

We can break out a selection of suburbs by their recent immigrants to see where people are going. Immigrants from India tend to favour Surrey as a destination. Richmond received outsized attention from Chinese immigrants. North Vancouver selects for Iranian immigrants. Also, North Vancouver, like the City of Vancouver, seems to select for immigrants from Europe and the Americas. As pointed out recently by Kishone Roy and in the past by others, American immigration to Vancouver probably hasn’t received as much attention as it should! Especially since the USA’s Federal Voting Assistance Program believes Vancouver houses more American citizens abroad than any other world city! (Given that the Census only shows 26,445 immigrants to Vancouver born in the USA, many of these Americans abroad are undoubtedly dual citizens who were granted citizenship from past residency in the USA or from their parents).

As demonstrated by the difference between citizenship and place of birth in the case of ties to the USA, just looking at place of birth doesn’t fully represent the nature of Gateway Communities. The same issues certainly arise in comparing those born in Hong Kong to the much larger community claiming ties to Hong Kong. Aside from place of birth and citizenship, there are other ways to think about and chart the diversity gathered in Vancouver by virtue of its Gateway status. Immigration often produces linguistic communities, that are sometimes (but not always) passed between generations of immigrants. How many languages have 5,000 or more speakers in Metro Vancouver? 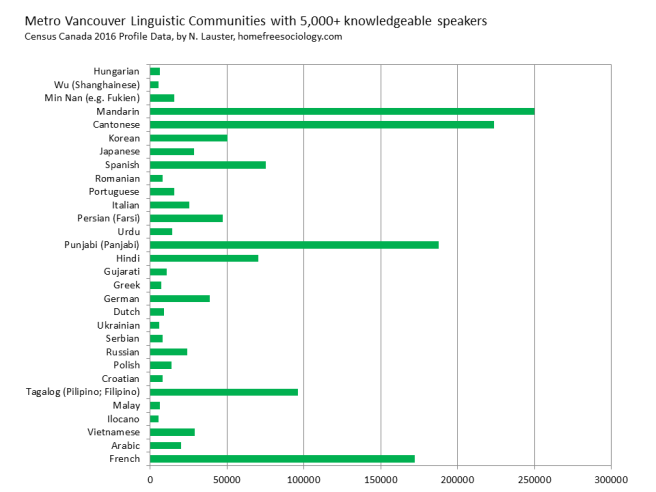 The wonderful thing about looking at languages is that it helps break down nations into their component parts. Cantonese, once the dominant Chinese linguistic community in Vancouver, must now share with Mandarin. But Wu and Min Nan linguistic communities also remain vibrant and point toward the diversity within China as well as the Chinese diaspora. Similarly, we get a lot of immigrants from India, but we get an especially large number from the Punjab. When they arrive, they pass on Punjabi between generations. Far fewer speak Hindi, despite its dominance in India. We also see multiple linguistic communities from the Philippines, with both Tagalog and Ilocano having over 5,000 speakers. The vast majority of residents speak English, but French is also relatively common and a diverse cast of other European languages find a home in Vancouver.

Let’s look at the diversity of Vancouver in one more way. Instead of thinking about how different communities measure up to one another in Vancouver, let’s see how they measure up to their sending countries. In some ways this is similar to the study of Americans abroad carried out by the USA’s FVAP above, but we’ll put it in context of the population of sending country. How many people immigrate to Metro Vancouver per million people living in their homeland (i.e. country of birth)? This gives us a rough sense of the “risk” of moving to Vancouver and/or its “pull” upon various places around the world. We can look at both total immigrants born elsewhere and just recent immigrants, having arrived in the five years prior to the 2016 Census (2011-2016). 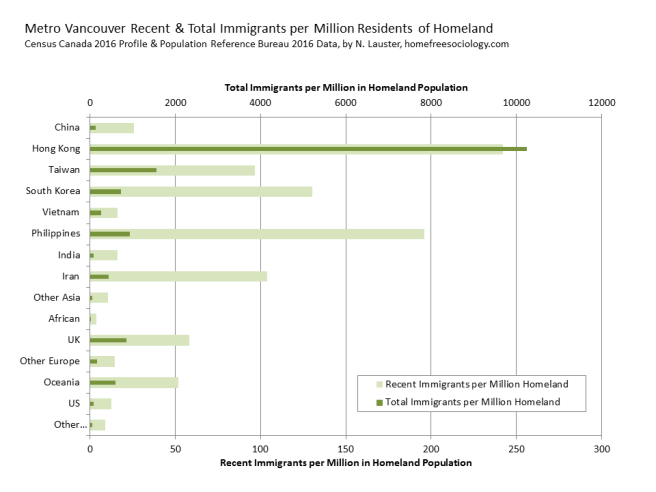 In terms of “pull,” Hong Kong is the hands-down winner. There’s at least one Hong Kong transplant living in Metro Vancouver now for every one hundred residents of Hong Kong. The pattern is similar, if less pronounced, for Taiwan. But Hong Kong and Taiwan are also (kind of) cheating. They are both still considered part of China in many respects, though their historical patterns of connection to Vancouver are far more intense. For more recent immigrant streams, the connection is less pronounced, but still there. The recent pull from the Philippines contends with Hong Kong, and along with South Korea and Iran, conspires to beat the pull for recent immigrants from Taiwan.

In terms of “pull” for recent migrants, about twenty-six Chinese in a million immigrated to Metro Vancouver between 2011-2016. This means Mainland China lags far behind Hong Kong, Taiwan, the Philippines, South Korea, Iran, the United Kingdom, and all of Oceania in terms of risk of immigrating into the region. But, of course, there are a lot more people living in Mainland China than any of these other places.

There aren’t that many more people in China than in India. India’s patterns of immigration to Vancouver are somewhat deceiving. Most arrivals are from the Punjab region, and the numbers belie the importance of Vancouver to the Punjabi Sikh diaspora. Looking just at residents of Vancouver with knowledge of Punjabi who were born abroad, the estimate for how many Punjabis have moved to Vancouver sits around 3,000 per Million residents of the Indian Pubjab, placing the “pull” of Vancouver for this particular region inbetween the pull for Taiwan and Hong Kong.

Overall, this is a reminder that the Gateway Communities of Vancouver are strikingly diverse. Ideally media stories should strive to avoid erasing this diversity when talking about how immigration affects the City and the region. ALL of these collectives offer the possibility for meaningful communities to form, gathered together here in Vancouver, just inside the Gates to Canada. Considered all together, they help keep the Gates to Canada open.