So America’s taken a turn for the dark, and a page out of the songbook of Leonard Cohen.

The vote suggests a turn toward a darker vision of America as it currently exists, painting a bleak picture of a rigged system put in place by a self-interested elite living side-by-side with a misled multicultural mob in the hellish cityscapes along the coasts.

I don’t recognize this vision. And I’m not sure how many others do. The polls failed us, suggesting somewhere between a 71% to 99%+ likelihood of a Clinton win (credit where it’s due, Nate Silver at least got the uncertainty right! I long suspected and hoped that Sam Wang was closer). We seem to have ushered in a new, dark age in polling, long feared, but until recently mostly postponed, at least in US politics.  Here, too, we’ve taken a turn for the dark.

And of course, we have no idea what Trump will do as president.He’s promised to “Make America Great Again,” suggesting a return to a glorious, and largely imaginary past. It’s true, income inequality during and after WWII, under FDR, hit all-time lows, according to Picketty and Saez, only to take off again in the 1980s under Reagan. 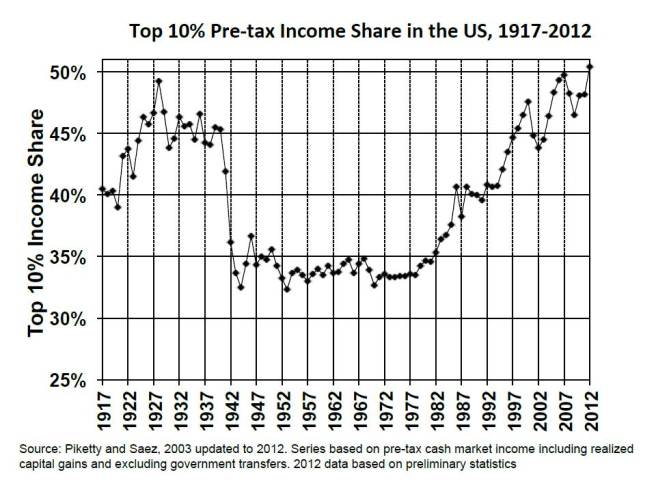 To be sure, much of the decline in income inequality seemed connected to a broadly prosperous working class and large manufacturing base. But I have a hard time seeing a Republican government successfully bring this back, especially given widespread antagonism to the unions that often made this work. I have a much easier time seeing Republicans attempting to “make American great again” by curtailing the rights of women and minorities. This, of course, is the vision of where the alt-right wants to take us, and it’s squarely in-line with the Trump campaign.  Here, too, America has taken a turn for the dark. Possibly very, very dark.

A Republican government will own the next two years (at least) and possibly longer. The (in my view likely) failure of this government to enact policies that will make anything better for either the vast majority of people who voted for them, or for those who didn’t may move us toward a political re-alignment in the long term, favoring some set of Democrats and responsible Republicans. But the temptation will be there for Republicans to instead pin the blame for their (likely) failures on imaginary internal and external foes. This temptation has basically been Trump’s entire campaign. It’s too easy to imagine it taking hold in a wider form, even if I hadn’t just read through Philip Roth’s excellent The Plot Against America this past year.  You want it darker?  It doesn’t get much darker than the macho victimhood of fascism.

If there’s an even darker lining to all of this darkness, it’s that Trump seems to be a liar, a con-man, and a narcissist. He hasn’t played well with his fellow Republicans. Who knows what he’ll do in power?  Maybe he’ll just use his position to enrich himself and sell more stuff. I fear he will try to make good on his promises, but I take some small, weird measure of comfort from his failure to do so in the past and the fact that I remain so thoroughly in the dark about how things will turn out.

You want it darker? We kill the flame.

One thought on “You want it darker…”