As I noted earlier, most stories about Zika have failed (utterly) to contextualize the crisis with the numbers and risks involved.  To be fair, that’s because they haven’t been all that well known.  As the facts on the ground become clearer, it’s starting to look like a very different story.  Here’s where we started:

Now we have a new suggestion that the real relationship is more like this:

If this is borne out by more investigation, we’ve got a textbook case of a spurious relationship on our hands.  And also a new cautionary tale about mucking about with the environment. What would happen if we took relationship one to suggest the need for even more larvicide?

Still early days, but this is a striking turn of events, and so far seems like a much better fit to the data.

* Update * This from the Guardian strikes me as the best media-related commentary I’ve seen so far.  There remains plenty of uncertainty, but the hysteria around Zika has been way overblown.  In the public health world, this seems to be largely due to international failures around dealing with the Ebola outbreak from 2014, which appears to have killed around 11,316 people (a recent update providing data on the 2014 Ebola crisis was just posted by the CDC a few days ago, which gives us an idea of how long it tends to take to develop a relatively clear picture of what’s happening with world health crises).  Below, widely varying estimates of the number of suspected cases of microcephaly in Brazil depending upon the criteria used, as published in The Lancet. 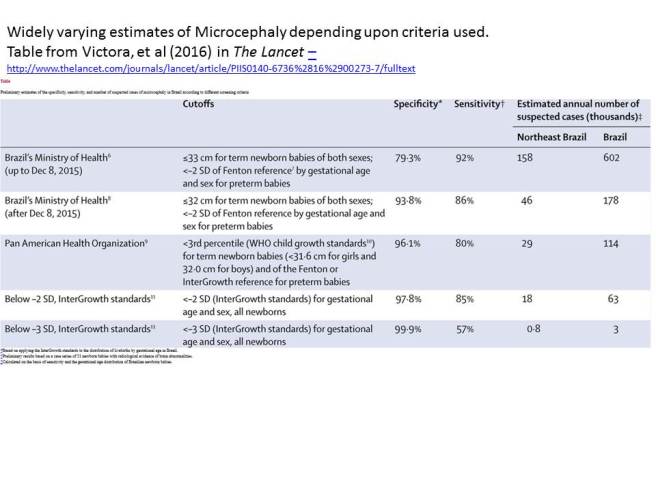