As mentioned in my previous post, the sensational claim that Vancouver has built 1.19 dwelling units for every new household added since 2001 has been making the rounds, leading many people to suggest Vancouver has over-built for the past fifteen years. We don’t need any more supply, they suggest! First, make better use of what we’ve got!

Here I want to offer an alternative theory: We haven’t been overbuilding at all. But we have been undercounting.

First let me the numbers behind the claim. Here’s what happens when we compare counts of dwellings in 2001 and 2016 to counts of households across the same years. (*correction: as pointed out in a later blog post, my #s are off here compared to Rose’s #s, likely a result of different sourcing and errors introduced in hasty tracking down/transcription – see also addendum below. These errors don’t change the substance of the broader critique introduced later in the post. See Jens for better replication!*) 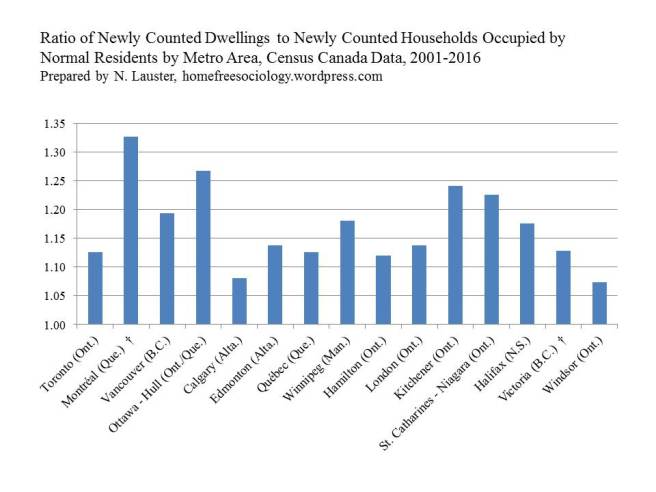 Sure enough, Vancouver clocks in at a ratio of 1.19 Newly Counted Dwellings to Newly Counted Households between 2001 and 2016. BUT two things bear observing. 1) Vancouver isn’t especially unusual in this regard, and 2) I used the words “Newly Counted” rather than “Newly Built” for a reason.

It’s hard to count dwellings. I used to work cleaning up census data for public release as a post-doc with the Minnesota Population Center (beloved home of IPUMS census microdata files freely available to everyone). As a result, I have some idea how messy census data can be. Counting people is difficult at the scales at which censuses operate. Counting and classifying dwellings is only the first part of that endeavor. But every census year, the folks at Statistics Canada work toward getting better and better at their jobs. Everyone there deserves a raise!

Unfortunately, sometimes when people at the Census get better at counting, it screws up our ability to perform decent historical comparisons using the data. (A similar problem, of course, plagues homeless counts). In 2001 and again in 2006, the people working on the Canadian Census tried out some new techniques for counting dwellings. They footnoted these techniques, and raised flags about data comparability (for more follow-up on the links above), but I don’t think anyone has adequately accounted for their effects on our estimates of occupancy rates. So let’s do a little comparison. Here’s the proportion of dwellings occupied by usual residents from 1991-2016.

Notice how EVERY single one of our top fifteen metropolises shifts down together in occupancy between 1996 and 2006? By 2011, nowhere in the country had an occupancy rate anywhere near the (frankly unrealistic) highs of 1996. That’s a big old red flag that the methods Statistics Canada incorporated into the census for counting dwellings across these years underwent some pretty important changes, challenging comparability across different Censuses.

So, if friends shouldn’t let friends run historical comparisons of Dwelling Occupancy (by usual residents) using the 2001 and 2006 census years, then what data SHOULD we use to assess new supply? Fortunately, we have CMHC construction data! This is provided to Statistics Canada via surveys of municipal permits. Not all metro areas have this data made public, but metro Toronto, Montreal, Vancouver, and Winnipeg do! Let’s test construction against some census data, shall we?

First, let’s look at completions data (referring to new dwelling units added to the market) for five year periods. How well does this compare with the number of people who report living in a new dwelling unit in the Census at the end of the period? I matched up the timelines for census data (which always uses the past five years leading up to the Census, which happens in May) and completions data (reported on a monthly basis). Are we building a lot of homes that no one reports living in?

Wow! Quite the opposite, it would seem. In early census years, more people report living in new homes than we have permitting data for.* Nevertheless, overall there’s a very close match between permitting data for new homes completed and census data on who reports living in a new home! This makes me feel better about both data sources. I read this to suggest that the permitting data is probably our best source for how much new housing we’re adding in a given metro area. For sure, it may miss internal subdivision of units and other sneaky additions that can be made to our housing stock, but it probably captures most new supply. Moreover – and this is important – very few new homes would appear to be empty – or even occupied by anything but their usual permanent residents. What do you know? When you build new homes for people, they report moving into them!

Ok, ok, so people like new homes. But what about the old homes destroyed to make the new homes? Good question. We haven’t really matched up new households between census years to new building stock yet. With both completions and demolitions data we should be able to track how many net dwellings we’re adding. I’m having a hard time getting all of the demolitions data I’d like, but drawing from the Metro Vancouver housing data books from 2010 and 2017, I can pull together enough demolitions data to get us back to 1999, and then impute the rest of the way back to 1996. Let’s compare new households counted across census years to net dwellings constructed during the same time periods** in Metro Vancouver. Just for kicks, we’ll throw in the additional number of dwellings counted during the same period.

Wow! New households occupied by usual (or normal) residents very closely tracks net construction (completions – demolitions). In recent years, the relationship is almost one to one. In earlier years, we actually added more new households than we did net permitted housing units. Why? Well, we probably found and/or counted some new households living in basement suites and other internal subdivisions not captured by the permitting data. After all, the census would appear to be getting better and better at finding these things! Yay!

Key points for the day:

* could be a weighting issue, an inaccurate reporting issue, or an incomplete permitting data issue.

**- this time I’m being a little more conservative in matching, using net data on previous years and just ignoring the period from Jan-May of the census year in gathering completion data.

[Thanks to Richard Wittstock for sharing his spreadsheet on permitting data, which helped me track down sources for the above!]

[Addendum, Dec. 4th, footnoting sources: After some frustration trying to find dwelling and occupied by usual resident household data for 1996 and 1991, I used hard copies of Census reports for 1991 and 1996 from UBC Library to find dwelling count data, then compared to household counts from Census reports in on-line community profiles to find households occupied by usual residents. This looks notably different from results produced by Andy Yan in the Vancouver Sun earlier this year. His results – for Vancouver only – look much more realistic! The underlying issues with comparing dwelling counts across 2001 and 2006 census years remain (though the trend may vary – in Andy’s data there’s actually a marked drop in non-occupied units in 2001, which I find fascinating), but I’m following up to try and track down better stats on these years. Other sourcing and data matching should be apparent from the descriptions above, but it’s worth noting that the proportion of residents identifying themselves as living in housing built in the five years leading up to each census comes mostly from census profiles, drawn from census long-form information, weighted to reflect households. I also drew this data from on-line analyses using UBC’s subscription to the CHASS interface with public-use census micro-data for some earlier years. Then I compared these figures to Metro Area-specific construction data for the five years leading up to the Census, including the months of January-April in the Census Year itself. Censuses, of course, are usually carried out in May. I was more conservative in estimating net dwellings constructed, counting only completed units up to the year ahead of the census year rather then extending into May, which allowed me to link up yearly demolitions data from Metro Handbook(s) – linked above. This means there may be slightly more net units added over a given time period – four months worth – than are tracked here. At the same time, I’m not entirely certain how and when newly constructed units get added to Census counts of dwellings and households in the process of preparing the Census! I’d really love to get a better handle on how Census counts of dwellings work… and possibly fail to work… in a practical and time-lined sense. I’m a big fan of their illustrations for how to classify units! Aren’t they vaguely adorable?]

3 thoughts on “Overbuilding vs. Undercounting”