[Short Version: A university education is one part vaccine against lies and one part credential for entry into the middle class. Which part explains the split in the white Trump vote? Mostly the vaccination against lying part. So stop using education as a proxy for who’s in the working class!]

There have been a boatload of stories about how “working class whites” swung the US election in favor of Trump. Most of these stories, when you look at them closely, use educational divides to define class. So that:

And indeed, evidence would seem to indicate that this group swung heavily toward Trump. The response, in many quarters, has been to imagine that white working class voters have been left behind in the de-industrializing economy of the USA. The vote for Trump was a vote to shake up the system, speaking of the pain and marginalization of disenfranchised factory workers and unemployed coal miners – especially in the American heartland. In more nuanced reporting, Trump voters are thought to share a “deep story” of resentment, directed at others “cutting in line” in pursuit of the American dream. (See Isaac Martin‘s thoughtful and critical review of this reporting). But let’s get back to some fundamental measurement issues. Since when was university education just about class, or class just about university education?

To be fair, universities have been selling themselves as the route to upward mobility (and/or maintenance of privilege) for a long time now. And we hear a lot about declining opportunities for those without university degrees, including in research on recent mortality trends. There is also great sociology that conflates these issues, if usually in nuanced form, as in Annette Lareau‘s very teachable Unequal Childhoods, where the big divide documented is labeled as class-based, but mostly concerns the interaction of primary schooling with different parenting styles for those with and without university educations.

Lareau’s work is nuanced and complicated in part because of how she studies education systems. These provide status and privilege directly, through credentialism, offering perhaps the clearest basis for thinking of universities as producing social classes. But Lareau shows how education systems also work in conjunction with distinct sets of parent-child interactions to inculcate particular habits. Some of these are about how to get authorities (like teachers) on your side. But others are more directly about how to use systems to gather and sort through information, as in doctor’s visits. Schools can help kids learn things, especially in conjunction with particular “classed” parental interventions. While Lareau studies elementary schools, the lesson should carry over into universities. In an ideal world (indeed, my ideal world!), university educations aren’t just about getting good jobs and reinforcing class divides. University educations are also about learning; about helping people sort through information. For instance, university educations may assist in discerning truth from lie.

To return to the 2016 presidential election: there’s been a lot of lying going on recently.

Armed with the recently released ANES (American National Election Study) 2016 results, I think I can make a pretty strong case for the latter interpretation.

First, to establish some basic points:

Point 1) Education can not be reduced to class (nor vice-versa).

If only we could just ask people what class they belonged to! Then we wouldn’t need to use education as a proxy. ANES 2016 to the rescue! People get to (or are forced to) claim their own class identification. I’ve simplified education and self-assigned class categories (the latter drawing from combining pre- and post-election questions), to see how they fit together. Here’s what I get:

There’s a definite relationship between education and self-assigned class, but it’s not at all a perfect fit. Most people make some choice between defining themselves as working class and middle class, although a few are willing to identify as lower or upper class. What’s striking is that within any given education category, you’ll find all four of these class self-identifications. There’s definitely a relationship, insofar as middle-class and upper-class identification rise with educational level, but there’s plenty of messiness, with a ton of people identifying themselves as middle class without a university degree.

But maybe this is all some kind of false consciousness? How about we run this again by pre-tax annual family income quartile and use that to assign class?

Once again, we see a clear relationship between education and income-assigned class, but it’s far from determinative. In many ways, this is a better comparison, insofar as people aren’t forced to identify with a (culturally poorly defined) class divide between “working” and “middle” and there are a lot more people who fit into the top and bottom quartiles (the quartile cut-offs, for those who care, are $27.5k, $60k, and $100k). But in other ways it’s a worse comparison, insofar as it ignores self-identification as well as important distinctions in both partnership status (adding a dual income can easily move someone up a quartile) and geography (relative income varies a lot by place).

Still, I’ll mostly stick with income quartile assigned class to make a few further observations. After all, family income can tell us a lot about marginalization. If we’re concerned about a white working class that’s been left behind, it might be more important to measure the resources income brings directly rather than thinking of class as a cultural identification. But both could potentially tell us more about marginalization than education.

Home ownership is another marker of middle-class status for many people (hey! Read my book! Or one of many others out there making roughly the same point). So who’s left out of the middle-class in terms of home ownership? Let’s check via our education v. income splits: 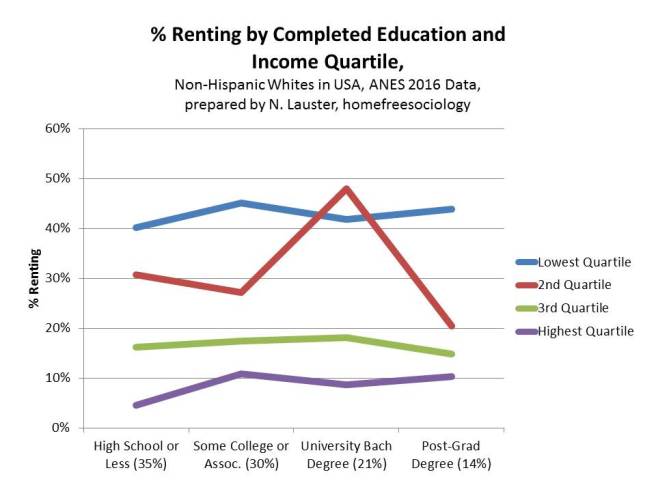 By and large, home ownership follows income rather than education. The lower your income quartile, the greater your likelihood of remaining a renter. This shouldn’t be too surprising. Mortgage lenders want to know your income and credit rating, but they really don’t care about your education. Indeed, there’s evidence from the recent past that lenders don’t necessarily want you to read the terms of your loan too closely. Education doesn’t track onto homeownership as a measure of class nearly as well as income. Let’s try a better measure of marginalization, tracking popular discourse about a white working class that’s been left behind. Who is most likely to be unemployed or disabled?

People who are unemployed or disabled mostly show up in the bottom income quartile. There is a shallow relationship to education (more highly educated people look less likely to show up as unemployed or disabled), but it seems to me marginalization is overwhelmingly about being stuck in that bottom income quartile. Those are the people who have truly been left behind. But we might also measure people’s feelings of dissatisfaction with their lot in life more directly – at least in the ANES data, where they’re asked “how satisfied are you with your life as a whole?” Most people are actually pretty satisfied, so here I group together those who are unsatisfied and those just “slightly satisfied.” 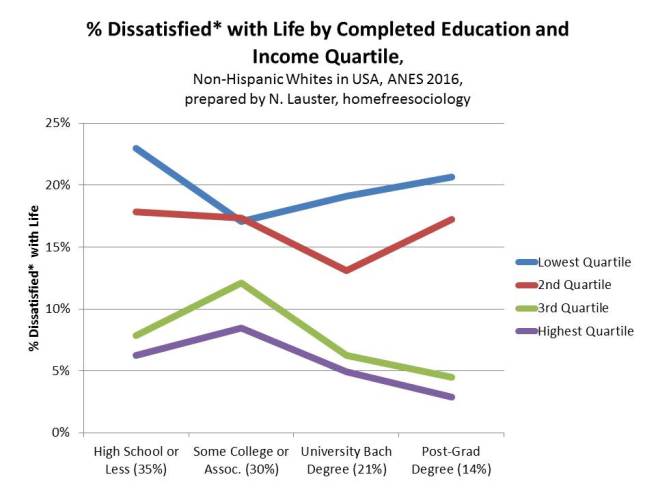 Lo and behold: here too I’m seeing mostly a relationship to income. Those in the bottom two quartiles are far more likely to be dissatisfied than those in the top two. To the extent there are relationships with education they look curvilinear, moving in different directions by  income quartile. A case could be made that people experience dissatisfaction both from marginalization in terms of their everyday resources, as well as in terms of the respect they feel their entitled to. I’ll set this aside for the moment to return to a central theme, education is a bad proxy for marginalization.

So if education is a bad proxy for social class insofar as we’re mostly talking about who’s getting (and feeling) marginalized in the USA, then what good IS education? And why does it so powerfully predict who voted for Trump? If we think of university educations not just in terms of the class credentials they provide, but also in terms of the skills at sorting through information we hope they provide, then we might imagine people who complete their university degrees are better at sorting lies from truth. Let’s test this. How does believing Barack Obama is Muslim breakdown by education and income quartile?

Hey! Now THAT looks like an education effect! As a faculty member at a big university, this is somewhat heartening. Maybe with every class I teach, my students are actually getting better at telling truth from lie. It’s working, it’s working! On the other hand, I’m not seeing big or consistent income effects here. This isn’t a class story so much as it’s a truthiness in education story. Completing a university education, working through all of those core classes in addition to electives, can provide an inoculation, of sorts, against lying. We’ve developed an effective vaccine against con-men! It’s called the university! (Not 100% effective, I know, but not half-bad).

So how does education versus income quartile play out in predicting a vote for Trump among those who actually bothered to vote?

Trump lies all the time. It’s pretty well documented. Those most likely to fall for the con are those least inoculated against it. This is not a straightforward story about the marginalization of the “white working class” (a story that always occludes the marginalization of everyone who isn’t white). Once you control for education in who voted for Trump, class effects either disappear, or actually turn back toward their “normal” alignment (more marginalized folks voting for more supportive candidates). Controlling for education, the unemployed and disabled tended to vote against Trump, as did renters. These election results were never about an uprising of the downtrodden (the dissatisfied on the other hand, tended to vote for Trump, which speaks perhaps to the more complicated relationship we might imagine between satisfaction in life and feelings of entitlement). Education was the big effect we saw in an election rife with misinformation – much of it weaponized against American democracy. Controlling for something as simple as people believing that “Obama is Muslim,” reduces the education effect considerably. The viral lies were effective once they got past our defenses.

So here’s a positive lesson from this election: if I sometimes doubted the value of my job prior to 2016, I can now rest a little easier. Universities aren’t just about reifying privilege, so it’s time to stop using degrees as a shortcut for talking about social class! And it’s time to take seriously what we’re doing in terms of helping people sort the truth from the lies. [In case you’re wondering, yes, it’s possible this whole post can be read as a pep talk to get myself to finish my grading…]

Here’s a full logistic regression model predicting a Trump vote, for those intrigued by such things:

I’ll readily admit that I’m a novice with ANES data – this is the first time I’ve played around it. I ran it through my old version of Stata 10. Happy to share my Stata code (as .pdf) Do-file-text

One thought on “Getting Educated about Working Class Whites”